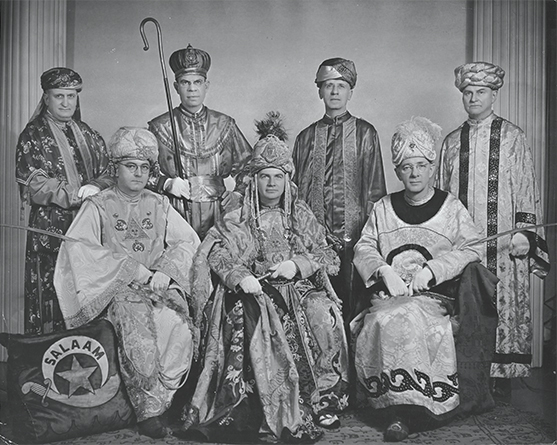 As the 20th century rolled around, Newark's changing ethnic mix was reflected in the composition of its organizations.

In 1901, the first Polish Falcon Nest No. 7 was founded on Belmont Avenue (Irvine Turner Boulevard). A few years later Nest No. 104 was established on South 20th Street. At first, these agencies were dedicated to educating Polish youth. They later broadened their activities to include fraternal activities. About 1920, the Portuguese Sport Club came into existence. Today it is a parent organization for the more than 60 Portuguese clubs in and around the Ironbound. A $3 membership fee allows the more than 4,000 Sport Club members access to the club's recently renovated sports facilities, clubhouse, educational services, library, and newly established museum.

Two other important clubs/associations opened early in the boom and bust era of the 1920s. In 1920, Salaam Temple AAONMS presented Newark with the Mosque Theater, today's Newark Symphony Hall. Never had the city seen such a glittering movie palace. Its nearly 3,000-seat auditorium rivals Boston's Symphony Hall for acoustics, and its architectural elegance was quickly recognized throughout the United States for its beauty. But bankruptcy soon followed, and only through the efforts of the Griffiths Music Foundation and Mrs. Parker O. Griffith and friends did the building and the concert series survive. Some time later the City of Newark assumed management. The other club/social agency which emerged at this time was the YM-YWHA at High Street. Today, the Citadel of Hope occupies the building, but from 1922-58 it was a hot bed of high culture. Details of the Y's activities were mentioned in a High Street/King Boulevard column that appeared in this space earlier this month.

About 1920, the Columbus Club came into existence, according to Ace Alagna, publisher of the Italian Tribune and executive director of the nation's second largest Columbus Day Parade. Also known as the Columbus Republican Club, it was organized by men from a particular town or region in Italy who met after work to play bocci, have a drink, or tell stories, old or new, about the good old days. Mario Alagna, Ace's father, was one of the founding members of the club when it first was located on Sheffield Street, now Ruggiero Plaza, in Newark's old First Ward near St. Lucy's Church.

The Bridge Club on Washington Street was established in the 1930s, and, according to former Mayor Kenneth Gibson, was an important place from which many African American politicians got their political start. A restaurant, club, social center, and important meeting place, the Bridge Club hosted activities for famous political figures including not only Ken Gibson, but the city's distaff political movers and shakers – Connie Woodruff, Larrie Stalks, and Pearl Beatty, to mention a few. The Bridge Club's longtime owner and manager, Carl Jones, fully realized the importance of the club's location to nearby City Hall and was a genial host to all comers. Like the Owl Club, its counterpart on Clinton Avenue, which later became home to the Vulcan Pioneers, Newark's black firefighters, many important ideas and events were shaped within its walls.

The Club Espana, founded in 1962, was located at Monroe and Downing streets before moving to its present location on New York Avenue. Al Fernandez, an original member and former officer, describes it as a fraternal association whose members also have great love for Spain, soccer, and the Spanish bagpipe.This is only one club in a growing Hispanic population. A recent review of the Newark area census shows 21 identifiable Spanish-language communities, including those representing Puerto Rico, Cuba, Santo Domingo, and Honduras. Every one of them has its own internal networking and club-oriented community. According to dictionary definitions of a club, Newark has met all the requirements for a variety of them for more than two centuries. From the old St. John's Club, founded in the mid-18th century, to the Newark Club, established in the 1990s, from the grand athletic and socially elite organizations of the pre-Depression days, to the friendly backyard neighborhood. Old-country support groups of recent times, there were and are all places for good friends to meet here in Newark.